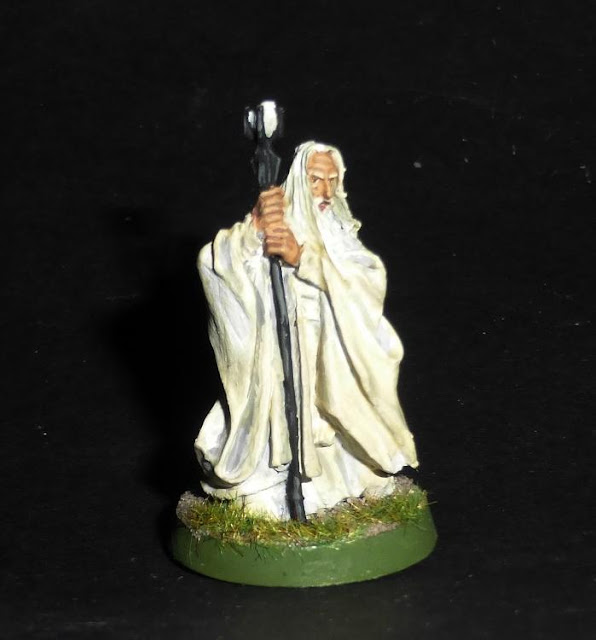 I can't host an, albeit intermittent, Lord of the Rings blog and not note the passing of Christopher Lee who, of course, was the only LotR cast member who had actually met Tolkein.  My effort at the Games Workshop Saruman (above) was one of the first (if not the first) metal Lord of the Rings figures I painted. 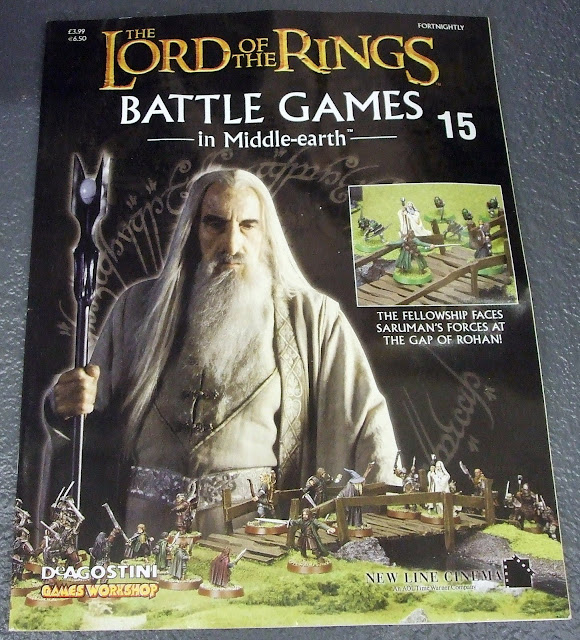 The Saruman figure came with Battle Games in Middle Earth issue 15 in 2002 and I painted it immediately, so before my blogs existed.   I am old enough to remember Christopher Lee as an actor in Hammer films Dracula series (and others) and, as an unlikely Chinese, in Harry Alan Towers Fu Manchu films in the sixties.  So it is in these films, rather than his later Star Wars and LotR incarnations, with which I really identify him. 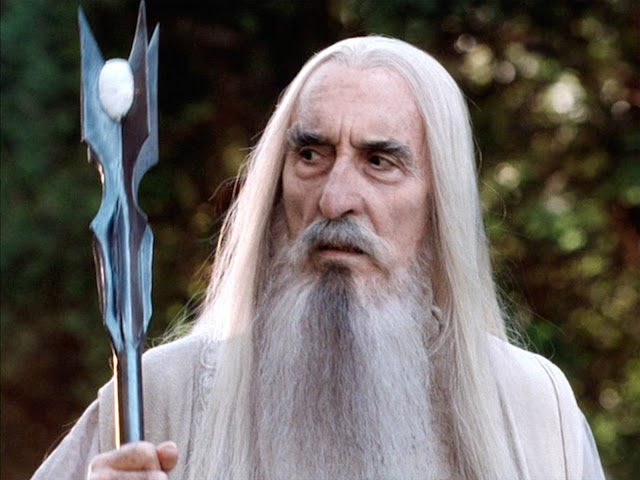 For me his appearance in The Lord of a Rings films was a surprise given his age at the time but now it is hard to imagine anyone else bringing Saruman to life.
Posted by legatus hedlius at 6/11/2015 09:42:00 pm 2 comments:

The Champions of Erebor 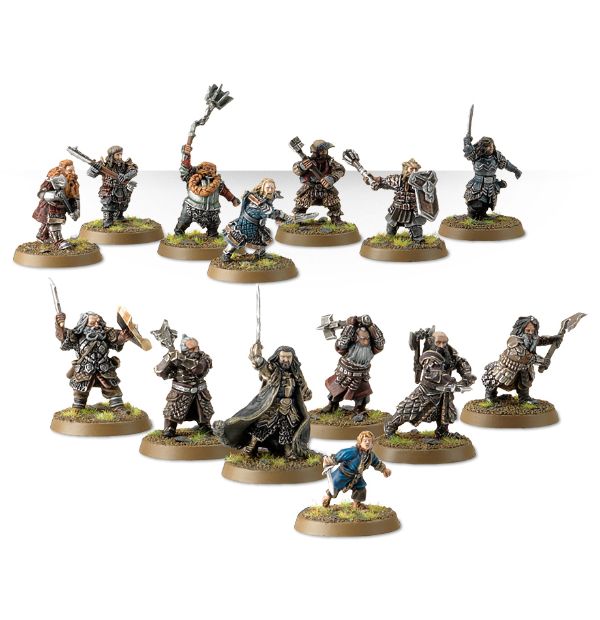 Others have commented on the outrageous price of these new Battle of Five Armies figures from Games Workshop: £118 in the UK and the fact that buying them in one lot like this gives no saving on buying the five individual packs they come in.

What it says to me, however, is that there are going to be no big battle plastics for the film, just horrifically expensive Finecast figures for even basic troop types.  A lost opportunity!
Posted by legatus hedlius at 12/04/2014 02:05:00 pm 4 comments:

Labels: Dwarves, The Battle of the Five Armies, The Hobbit 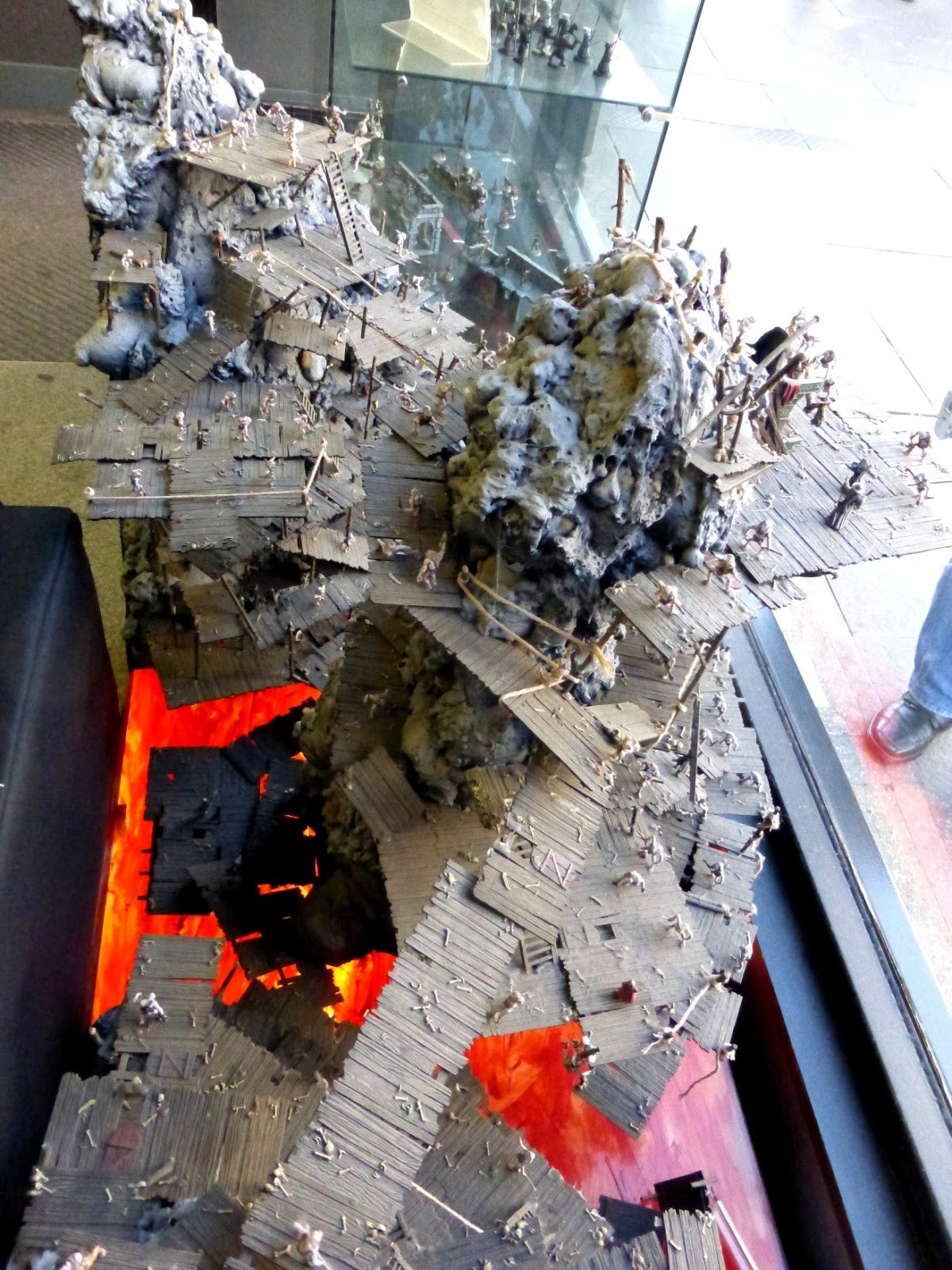 I was very impressed by this Goblin Town diorama in the window of Edinburgh's Games Workshop on the Royal Mile, when visiting there last week. 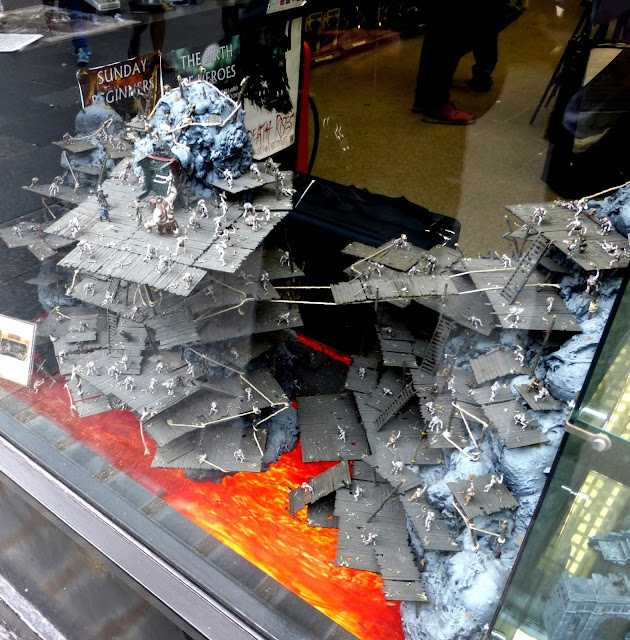 I shudder to think how many sets it took to create this piece! 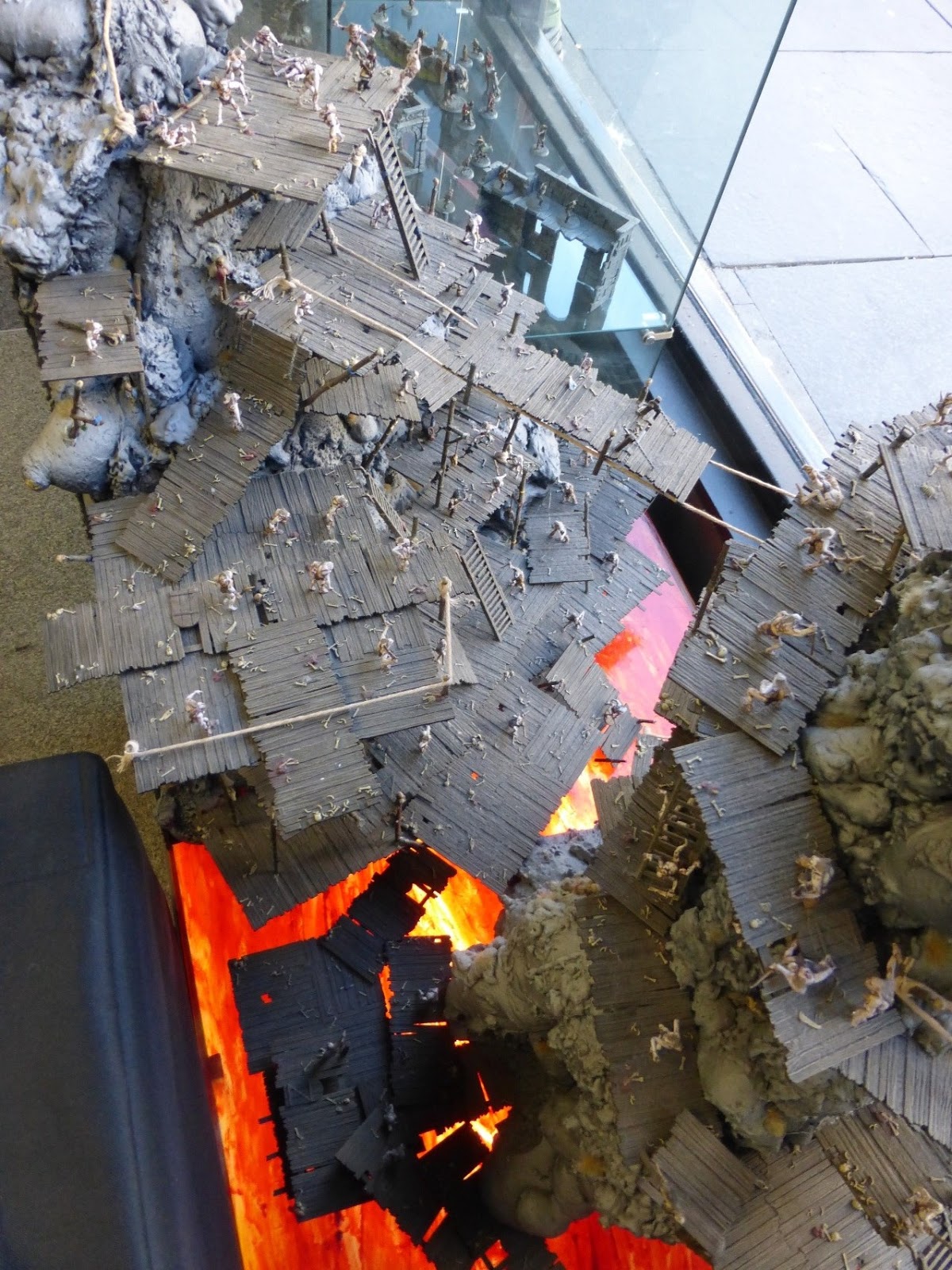 It's certainly a board that looks the part although they admitted it was a diorama rather than a playable model.  It's probably too delicate for actual games.  Very inspirational, though! The Battle of the Five Armies

So, we have our first glimpse of the battle of the Five Armies and it has, as you would expect lots of Orcs who are, also as expected, not as disciplined in traversing the ground as Uruk Hai.

There are also, as you would expect, armoured Elf archers.

However, what I wasn't expecting was what looks like armoured dwarf cavalry riding armoured ibexes!  Dwarf cavalry?  Riding mountain goats?  Surely not?  The big question is, how many of these troop types will actually appear as Games Workshop figures or will they just produce a few characters at £25 a time?

One thing I suspect will be released is this enormous chariot!

The trailer is here.

Labels: Dwarves, Elves, The Battle of the Five Armies, The Hobbit

Having finished the box of Warriors of Erebor I have rashly taken on another box of plastics for The Hobbit.  My daughter (it's her first pole dancing class tonight!) got me the Mirkwood Rangers for Christmas as a total surprise and she keeps demanding to see a painted one so I'd better get some done!  They are now assembled and based, ready for undercoating.  These figures are, for want of a better term, very 3D, moving away from the typical two plane approach to nearly all model soldiers necessitated by the moulding process.  These are two or three part models with, usually, a separate part for the coat tails which when fixed on the back takes them out of the two plane approach into something more dynamic.  I didn't like them when I first saw them as I thought they were too animated but now I am coming around to their very different look and wonder if the Perry twins will employ what they learned in the design process for these on some of their plastic historicals. 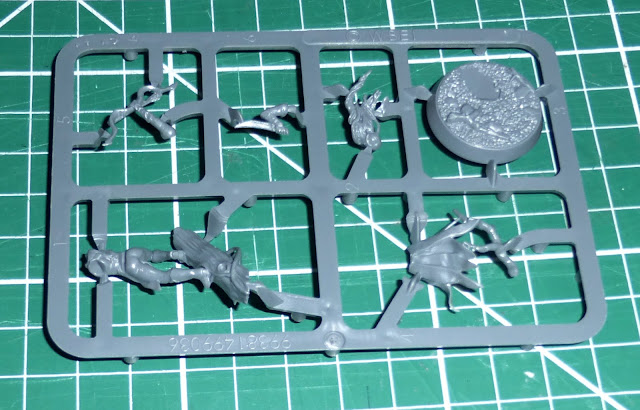 Tauriel has a particularly impressively sculpted posterior which is, sadly, hidden under her coat tails

For my birthday, two weeks after Christmas, my daughter the gave me the plastic Tauriel figure.  She is a five part model and literally stands out from the other elves because she is standing on a tree branch.  Now I can't stand scenic items on bases like this but, again, when assembled she looks rather fine.  It is, however, a staggeringly expensive plastic kit (more expensive than the Airfix 1/48 Hawker Hurricane, for example).  It makes you wonder what the future is for Finecast if they are going to make more characters as plastic kits, especially given the recent rumour that Games Workshop are shipping out all their old metal figures for scrap.  It's going to send the cost of second hand old metal figures sky high.  I just sold a set of metal Warhammer figures on eBay for more than I paid for them. 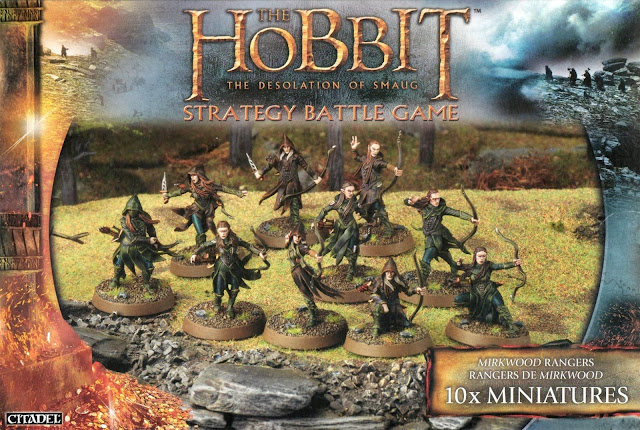 Now usually I undercoat my Lord of the Rings figures in black because it provides a good base for the very muted palette that Peter Jackson's designers use but my recent experience with the Warriors of Erebor was that I struggled to see some of the detail with black undercoat; especially given the bad light that persists in wind and rain riven Britain at present.  Given that these figures have no armour, however, I am going to take a risk and undercoat them in white.  My other issue with them is that I have no visual reference for them.  I haven't bought the two Desolation of Smaug Chronicles books yet, which always give a lot of costume details.  I don't trust the Games Workshop colour schemes. 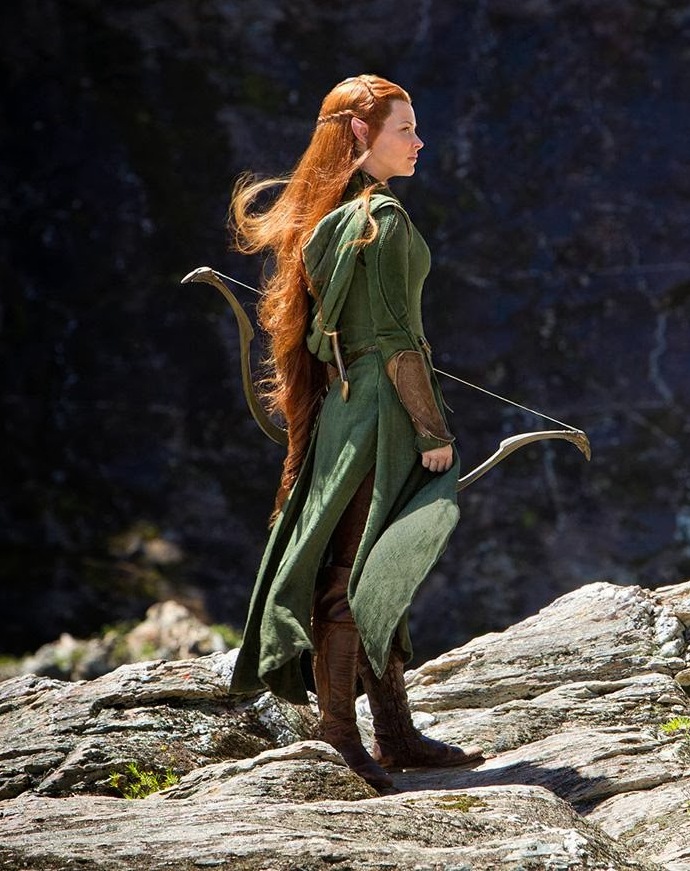 More fundamentally, I haven't managed to watch the film itself as everyone I know who would have seen it with me has already seen it.  I think I've missed it at the cinema now, which means it's the first of Peter Jackson's Tolkien films I haven't watched on the big screen.  It's staggering to think that I first watched The Fellowship of the Ring on New Year's Eve in 2001 - more than twelve years ago.   I saw it with friends in a cinema in Bath and they switched off the heating about half way through.  The scenes in the mines of Moria still make me shiver as by this point in the cinema we were all frozen, as it was a bitterly cold night. 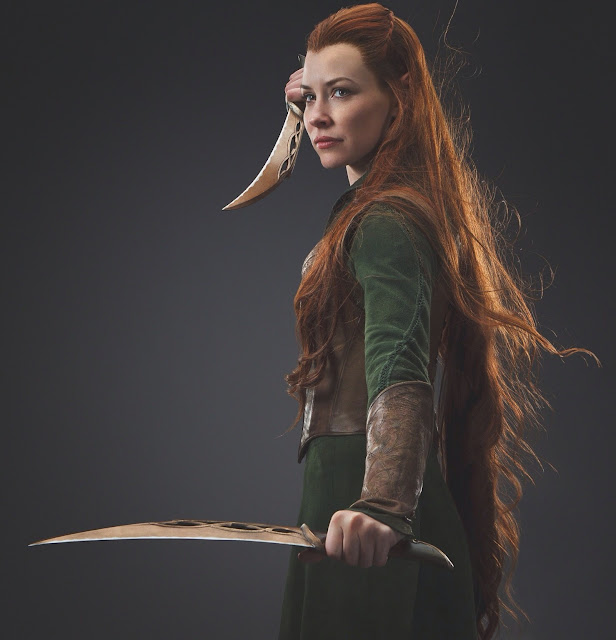 No date for the release of the DVD yet so I need to do some more research on the costumes.  I think I will start with Tauriel as there are a few pictures on the internet of her, although she seems to have several different costumes in the film.
Posted by legatus hedlius at 1/30/2014 08:52:00 pm 7 comments:

New White Dwarf dumps The Hobbit and the Lord of the Rings? 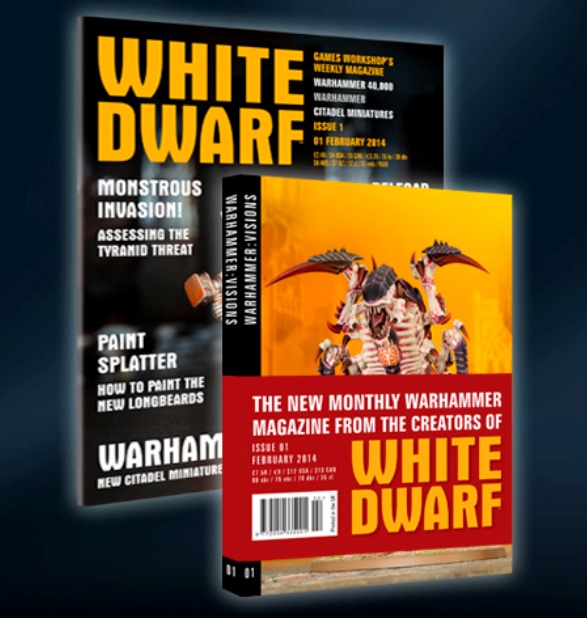 Games Workshop have officially announced their two new magazines to replace White Dwarf today.  White Dwarf becomes a very short 32 page weekly (stunted, indeed) and the monthly magazine is now called Warhammer Visions. From my point of view the interesting thing is that they have removed mention of The  Hobbit (and, therefore, by implication, the whole Lord of the Rings game) from the cover.  This means, I can only assume that only Warhammer and Warhammer 40,000 are now core games for Games Workshop.

I will have a look at them when they come out next Saturday.

When I first painted my Grim Hammers I gave them bases to match my Moria dwarves.  Now, however, I want to build the forces for the battle of Dimril Dale which means a normal base.  I have, therefore, redone the bases to match my warriors of Erebor.  This is now starting to look like a force, as it's twenty five figures!  Positively an army, by my standards!  I've now painted over 90 Good figures for the Lord of the Rings and The Hobbit!

Next up are the Rangers of Mirkwood and the Tauriel my daughter got me for my birthday this month. 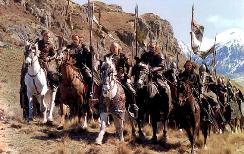 I confess that I had never been a fan of The Lord of the Rings until Peter Jackson's monumental films came out. I had never read the books and had, years before, given up on The Hobbit half way through. Now I have read most of them (I am still struggling to finish the Return of the King) and whilst acknowledging their influence and scope still don't think they are particularly readable.

No, for me , it was the fantastic images created by the film that inspired me. Oddly, when Games Workshop came out with their Fellowship of the Ring boxed set I didn't buy it as I couldn't see how you could turn a film featuring largely invincible heroes into a satisfactory game.

It wasn't until D'Agostini came out with their Battlegames in Middle Earth part-work that I got interested, at the prompting of my little boy, Guy, and subsequently subscribed to the magazine; eventually collecting every issue.

I painted the 12 goblins included in the first issue in a day and my little boy and I immediately played a game using these and the cardboard Aragorn included as well.

Since then I must have acquired hundreds of figures, although very few are painted. Most are designed by the Perry brothers and are, as a result, completely gorgeous. Some of them are truly remarkable portraits, in 25mm, of the actors who played the parts in the films.

Occasionally, LotR games are played at Guildford but the main driver for me in getting more figures done is Guy, who loves playing the game.

So over the next year or so I will see how many more of these splendid figures I can get onto the gaming table and even have a go at making some scenic items.

Other Lord of the Rings wargaming blogs

legatus hedlius
I live in Surrey, England but spend much of my year travelling around the world which seriously eats into my painting and blogging time!